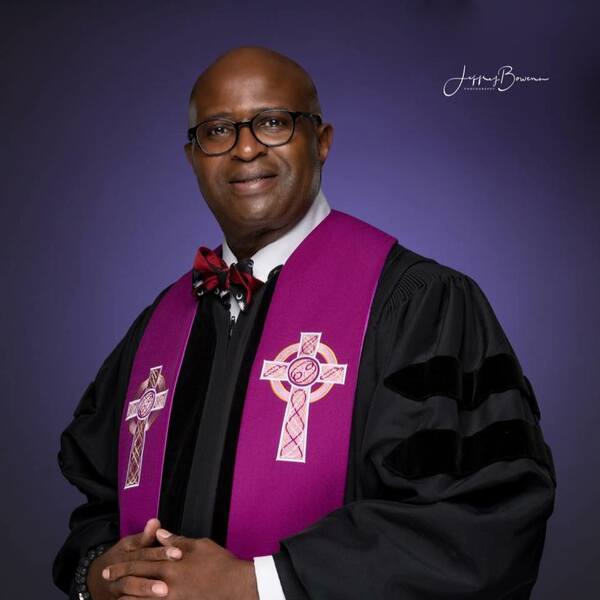 Known as a prophetic preacher, strategic thinker, coalition builder, visionary and social activist, White brings a bold and honest perspective to real world issues.  This visionary and charismatic leader has dedicated his life to the cause of civil and human rights.  God has given him a vision and a passion for helping people meet Jesus.  He has preached, lectured and served as keynote speaker at churches, conferences, colleges and universities across the country. He has served in various ministry contexts including campus ministry, urban renewal, rural, cross-racial and multi-ethnic. He has served in churches in the South Carolina, North Georgia, Arkansas and Tennessee Annual Conferences.

A native of the Sea Islands of Charleston, SC he is a lifelong member of the Wesley UMC in Hollywood, SC.  He earned a Bachelor of Arts in Religious Studies from the University of South Carolina and a Masters of Divinity with a concentration in Christian Education from Gammon Theological Seminary of the Interdenominational Theological Center in Atlanta, GA.

For over 30 years, Rev. White worked tirelessly as an advocate for social justice in with the National Association for the Advancement of Colored People (NAACP) rising through the ranks as a youth council president, President of the S.C. Youth and College Division, Regional Youth Director and Regional Director of the Southeast Region, the ranks to one of the NAACP’s senior leadership positions as the National Field Director and Director of Field Operations and Field Organizing. In 2014, at the invitation of the Reverend Al Sharpton, White joined the National Action Network (NAN) staff as National Field Director.

Rev. White served as Senior Pastor of the historic Gordon Memorial United Methodist Church in Nashville, Tennessee from 2015-2018 before leaving for an extended bereavement leave.  In October of 2019, Bishop Jonathan Holston of the South Annual Conference of United Methodist Church, appointed White as the Senior Pastor of the historic I. DeQuincey Newman United Methodist Church in Columbia, SC.  Six months later White would be called to serve the Saint Stephen UMC in Orangeburg, SC.  On June 30, 2021, Pastor White began a new journey as Senior Pastor of the Saint Mark UMC (The 9-1-1 Nation), in Taylors, SC.  Saint Mark’s history is rooted in dynamic worship, outreach and community engagement. In concert with Saint Mark’s mission, White’s personal goal is to live out CHURCH beyond the walls with the CHURCH being the center of the community, a place where people are understood, embraced and valued for who they are and where they are as we journey to make disciples.

Among his numerous honors and awards include the 2009 recipient of the NAACP’s Medgar Evers Award, the highest honor bestowed on a NAACP National Staff member. He earned recognition by the South Carolina, Georgia and Tennessee House of Representatives for his outstanding work in civil rights.  He is also a proud member of Alpha Phi Alpha Fraternity, Inc. and a charter member of the Rho Phil Lambda Chapter in Metro-Atlanta.  White has served on the Board of Trustees for the Center for African American Male Research, Success and Leadership at the University of West Georgia and Fort Valley State University, People For the American Way African American Ministers L eadership Council and the national American Red Cross Minority Advisory Committee.

He has been most recognized for his ability to influence and motivate young African American males and is the Founder and CEO of Brothers United for Change, a ministry dedicated to “Saving Black Boys:  One at a Time” particularly situated in rural and isolated communities.

The Rockwood Leadership Institute selected White as one of 24 progressive executive management leaders for the 2013-14 Leaders from the Inside Out Fellowship Program designed to strengthen senior leadership in the non-profit section.

White is the principal in the WhiteGroup, Inc., a public relations consulting firm dedicated to social justice work.

He was married to the late Lady Adrienne Thompson-White, and is the proud father of three sons, Dwayne, and Alexander, both Veterans of the War in Iraq, and his youngest DJ, a Senior at Wade Hampton High School.  He has four lovely grandchildren, Davion, Chloe, Christina and Kaylan.

He has been blessed and is a true believer that the gifts of God's precious Holy Spirit are the empowering force for the people of the Village!  Rev. White models his life after the African American spiritual: “If I Can Help Somebody As I Pass Along, then My Living Shall Not Be In Vain.”